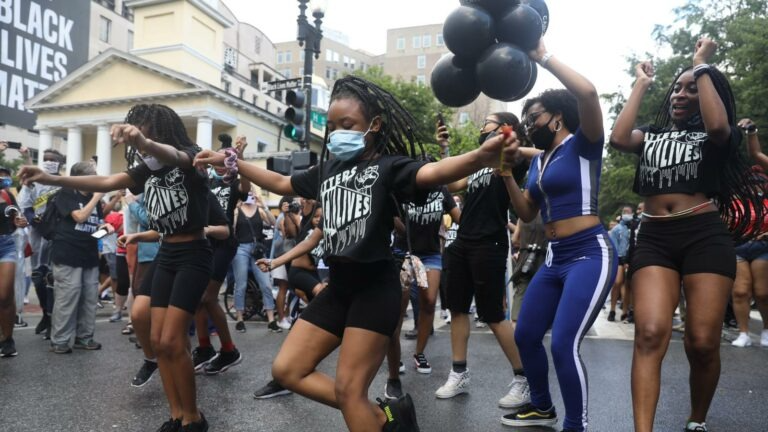 How (And Where) D.C. Is Celebrating Juneteenth : NPR

One would have to struggle this year not to find something to do locally for Juneteenth. Following last year’s renewed energy around the newest federal holiday — which celebrates the emancipation of the enslaved people in Galveston, Texas, on June 19, 1865, widely recognized as the official end of slavery — residents, grassroots organizations, museums, and businesses are continuing the spirit of activism and the celebration of Black lives.

Amid last summer’s racial justice protests, activists called for people to celebrate the holiday more widely. And, just this week, Congress voted to make it a national holiday.

As COVID-19 restrictions lift across the region, many groups are hosting in-person events to celebrate this year; but for those who want to avoid the large crowds, virtual events are aplenty. (But if you’re going IRL, make sure to check the mask requirements ahead of time.) Here’s what’s happening this weekend across the region.

Long Live GoGo is responsible for everything from protests outside the postmaster general’s home to a book about go-go-fueled activism. With a ubiquitous go-go truck leading the way, the group is hosting a moving party that starts at Black Lives Matter Plaza and ends at 14th and U streets. It starts Saturday at 2 p.m.

Food and culture blogger Feed the Malik (Anela Malik) has spent more than a year dining at as many Black-owned restaurants as possible. After noticing a lack of these businesses on local “best of” lists, Malik put together a guide to eating at the D.C.-area’s many incredible Black-owned establishments, which she’s recommended diving into this weekend. (Disclaimer: Malik has contributed to DCist.)

At Kintsugi, the Eaton Hotel’s street-facing cafe, the Freedom Futures Collective — a self-described collective of multimedia activists and artists — is hosting an outdoor performance and open mic event from 4 p.m.-6 p.m. on Saturday. Then, starting at 9 p.m., Black Techno Matters is hosting a five-hour DJ set in one of the hotel spaces, with an ambient, electronic performance by Smoke & Tea. But that’s just the final stop of an all-night party — the group is starting its 12-hour celebration with techno music in Malcolm X Park at 2 p.m., followed by a Black business march on the U Street corridor, and a rave in the Eaton’s alleyway. The hotel will also project images from “Resist Covid Take 6” across its building — the project aims to show the disproportionate effect of the virus on communities of color.

From 12 p.m.-4 p.m., the Total Liberation Collective is putting together a series of craft activities, games, music, and more at the Anacostia Park Roller Skating Pavilion. The socially distanced event is family-friendly. Plus, continuing its mutual aid efforts, the grassroots org is hosting a market with food, books, and raffle prizes.

For anyone wondering what a noise demo is, take a look at this video of activists shouting in solidarity with people at the DJ Jail. The Incarcerated Workers Organizing Committee will meet Saturday at 7:30 p.m at the Stadium-Armory Metro station and protest outside the jail to draw attention to the prison system’s effect on the Black community. “None of us are free until all of us are free!” the group declares on its event page. “This Juneteenth, we continue the demand for total emancipation.”

Black Swan Academy — which has helped organize a massive mutual aid network for wards 7 and 8 during the pandemic — is hosting a block party Saturday at Fort Dupont Park. From 12 p.m.-3 p.m., guests can expect food, games, and talks from activists from the DC Girls’ Coalition and other local groups. The academy is asking participants to volunteer and donate a red dish — red foods are a Juneteenth tradition, commemorating a history of strength, spirituality, life, and death.

WANDA (Women Advancing Nutrition Dietetics and Agriculture) is celebrating sisterhood with healthy meals with a celebration at Oxon Run Park, from 4 to 7 p.m. Saturday. “One of the most important parts of our community’s liberation is achieving health equity,” said Mary Blackford, owner of Market 7, a food hall coming to Ward 7, in a statement. Guests are encouraged to wear African prints and bring stories, photos, and recipes — these will be collected for a cookbook the organizers are putting together. WANDA writes in a press release that Juneteenth represents “freedom, family, faith, and food — red foods, in particular — to celebrate the resilient spirit of African Americans in this country.”

Broccoli City and Streets Calling Bike Club are hosting a bike ride, starting at Sandlot Southeast at 10:30 a.m., taking off at 11 a.m., and circling back to the outdoor drinks and food venue at 1 p.m. Don’t have a bike? The organizers say you can rent a bike from Bike and Roll DC using promo code “SCBC20” for a discount.

As the National African American History and Culture Museum reopens to the public with timed-entry passes, it’s also assembled a number of Juneteenth-related resources on its website. The museum is hosting a day of author talks and readings, musical performances, and a genealogy presentation with the museum’s experts. Also, for those looking to cook something celebratory, the museum is listing recipes like BBQ brisket sandwiches.

One DC, an organization that has helped Washingtonians get jobs since 2013, is reopening its Black Workers & Wellness Center after a five-year fundraising campaign. The Anacostia space is a place to organize for racial and economic justice. From 11 a.m.-5 p.m. Saturday, the organizers will celebrate the center’s reopening with go-go music, a chorus performance, food vendors, and more.

The New Orchestra of Washington is celebrating Black composers with its first live performance in over a year. At 7 p.m. Saturday, the orchestra will perform at Strathmore’s new Patio Stage, hitting on the works of composers like George Walker, William Grant Still, and Florence Price. The performance will also focus heavily on a modern composer and violinist, Jessie Montgomery, a Black woman whose success is breaking down barriers in the classical music space.

Martha’s Table is hosting its third annual “Fathers to the Front” event at its headquarters in Southeast D.C. From 12 to 4 p.m. on Saturday, the nonprofit will celebrate fathers and male caregivers with food, giveaways, and music by DJ Quicksilva and go-go legends Sugar Bear & EU.

A Tea and Herbs Party

Calabash Tea and Tonic is reopening its Brookland storefront and celebrating with a big party, featuring new menu items, beverages, and “community-tea” members on its patio.

The “BURG” Family Reunion Club, a nonprofit organization preserving the memory of Black Leesburg residents and supporting the current residents, is hosting a major Juneteenth bash from 12 p.m.-6 p.m. in Ida Lee Park. The Chuck Brown Band is headlining the event, which features a host of food and drink vendors.

Is there an event or demonstration missing from this list? Please send information to [email protected].

This story is from DCist.com, the local news website of WAMU.

Crockpot Recipes that Make a Week’s Worth of Lunches

Best Automotive Battery
We use cookies on our website to give you the most relevant experience by remembering your preferences and repeat visits. By clicking “Accept All”, you consent to the use of ALL the cookies. However, you may visit "Cookie Settings" to provide a controlled consent.
Cookie SettingsAccept All
Manage consent